Religions Conflict began in 2002 as the website “Religion is Dumb” (RID). It is being rebuilt from scratch at this time (2017) so expect more content, but not nearly as much as found at the blogroll and webroll links.

The purpose of this site is stated in brief on the landing page, and to that end it hosts and links to a compilation of arguments and ideas that promote science, reason, logic, and a compassionate and upstanding world. The purpose of this site is not to demand people believe this-or-that, or to change unless it’s on their terms (to state the obvious). Some people argue strongly for the abolition of religion altogether, others not. The intentions here are indeed to help rid the world of the mental sepsis called religion by laying waste its ideas and what it claims as truth. This isn’t to say that some religious people haven’t done good things, and can’t be good people, and it goes without saying that people should be free to believe as they wish, be it in truth or lies, but if those beliefs mean a person harms or takes up arms against another then to “hell” with those ideas and those people. Is this in an inherent risk of what it means to evolve and be human, or is it limited to ideologies like religion, or even secularism and statism? 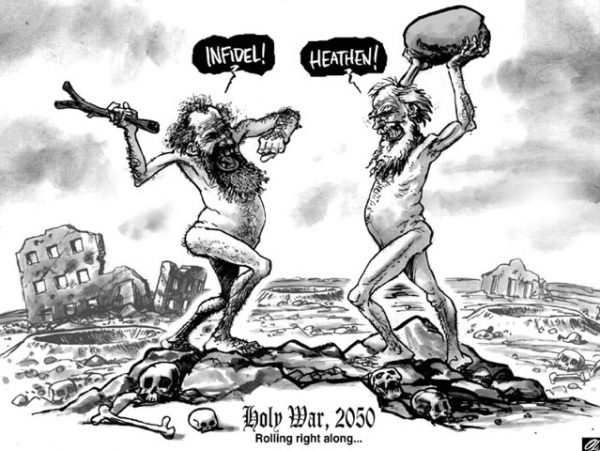 Scientific inquiry, logic, and reason can reveal the shortcomings of many ideas, but don’t necessarily Always lead to “The Truth.” Religions typically claim to have a monopoly on “The Truth” or The Answer, and science and rationalism the same with the exception that they are open to change. Not that cults and religions don’t evolve or change, but in general questioning their own validity is not the modus operandi. This makes the ideas, or truths, of religion fair game for scrutiny, and similarly leads to conflict between and within religions.

…theologians are well aware… that faith alone is not sufficient to make even half-wits believe in their mumbo-jumbo; they sense a need to sweeten the dose with such testimony as would convince a judge and jury. The result of their labours…has been only to reduce human reason to the quaking and malarious thing that it is today…and convert logic into a weapon that mauls the truth far more than it defends it… The truth is that every priest who really understands the nature of his business is well aware that science is its natural and implacable enemy. He knows that every time the bounds of exact knowledge are widened, however modestly, the domain of theology is correspondingly narrowed… Religion is a flight from reality. H.L. Mencken

The reality is that theologians and philosophers have produced nothing more than strings of words or fabricated relics as evidence for the existence of deities, not physical evidence or the deities themselves revealing themselves as “super” beings that deserve reverence and homage. The words that theists have compiled fail to give humanity even one reason to believe that any deity exists, or that miracles are real, or that there is any difference between a prayer and a wish. Religion is dumb in that sense because all we have are the words and phantasmal imaginations of theists, and never faith, just blind belief. Devoting time, resources, and energy into the words of theism is dumb (and possibly psychotic). If that’s how someone chooses to roll, they are free to do so, and Religions Conflict is similarly devoted to words and resources, but not as a means to keep the psychosis for a faux coexistence of religion going, but as a means toward an educational attempt to help vanquish it off the cosmic island called Earth by widening the god of the gaps, and the gap between gods.

Superstition is the religion of feeble minds. Edward Burke

What Burke failed to mention or recognize is that religion is superstition, and as such it is feeble. However, is all thought, and the attempt to prove any knowledge feeble, if not futile? To explain or show something to be true, or knowledge, we can turn to proof, but what is the proof based on? We end up with an infinite regress of proof, on proof, on proof….”turtles all the way down,” which bring us to three choices for proof (the Agrippan or Münchhausen trilemma):

All deductive arguments are circular and/or question-begging because the argument is in the premise and results in a conclusion that begs the question of how the claim is not circular. How do we get away from using an argument that assumes the premise is proved from the outset or based on an apparent axiom?

For those that believe that there are no non-arbitrary axioms, three disastrous implications follow: the statement is self-referentially incoherent, knowledge cannot exist, and any proposition P and its negation ~P becomes true.

…Thus, in the absence of non-arbitrary axioms, knowledge is not possible. This means that people who believe that all axioms are arbitrary have to give up science, math and logic. Most people are not willing to surrender these areas, and so they must reject their position that there are no non-arbitrary axioms.

The rejection of non-arbitrary axioms cannot be sustained. It is self-refuting. It eliminates the possibility of knowledge and it makes everything both true and false at the same time. Appealing to coherentism does not work because consistency is not sufficient for knowledge and there can be no model selection between two equally internally coherent, but mutually contradicting, systems.

We can’t escape these problems on this site, but we will try to present what seems sound, rational, and logical given the circumstances, and provide an alternative reality to the fantasies of religion.

The truths of science change as evidence to the contrary arises. Religion, on the other hand, is blind-belief where the answer is not up for debate because it is built on absolutes and il/logic alone. Science is built on empiricism, and faith in that evidence, not blind belief. Questioning religious truths can involve the truths of science, but more often the truths of a priori logic and reason, as that is what religion mostly boils down to, words. It is impossible to get absolutes with science to prove religious claims, but not not impossible to show how holy thinking is absolutely full of holes. Granted, absence of evidence is not evidence of absence (ad ignorantiam), but as Bertrand Russell laid out the burden of proof is with the scientifically elusive claims of theists, not the burden to disprove them:

I ought to call myself an agnostic; but, for all practical purposes, I am an atheist. I do not think the existence of the Christian God any more probable than the existence of the Gods of Olympus or Valhalla. To take another illustration: nobody can prove that there is not between the Earth and Mars a china teapot revolving in an elliptical orbit, but nobody thinks this sufficiently likely to be taken into account in practice. I think the Christian God just as unlikely.

… since my assertion cannot be disproved, it is intolerable presumption on the part of human reason to doubt it, I should rightly be thought to be talking nonsense. If, however, the existence of such a teapot were affirmed in ancient books, taught as the sacred truth every Sunday, and instilled into the minds of children at school, hesitation to believe in its existence would become a mark of eccentricity and entitle the doubter to the attentions of the psychiatrist in an enlightened age or of the Inquisitor in an earlier time. Bertrand Russell

Besides the fact god is typically not defined as a material being like teapot would be, one has to ask if not matter, then what is god (“super matter”?) and how do we know? God only knows? Then what does god matter?